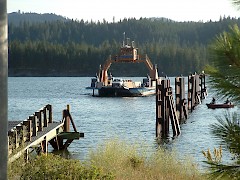 Franklin D. Roosevelt Lake (also called Lake Roosevelt) is the reservoir created in 1941 by the impoundment of the Columbia River by the Grand Coulee Dam in Washington state. It is named for Franklin D. Roosevelt, who was President during the construction of the dam. Covering 125 square miles (80,000 acres), it stretches about 150 miles from the Canadian border to Grand Coulee Dam, with over 600 miles of shoreline; it is the largest lake and reservoir in Washington, and home of Lake Roosevelt National Recreation Area.

The reservoir lies in parts of five counties in northeastern Washington; roughly in descending order of lake acreage they are Ferry, Stevens, Lincoln, Okanogan, and Grant counties. A good indication of the extent of the lake can be seen from a map centered about the town of Inchelium 48°17′49″N 118°11′48″W.

Once the lake formed behind Grand Coulee Dam, the Bureau of Reclamation referred to it as the Columbia Reservoir. In Stevens County, the Colville Examiner and other local newspapers referred to the lake as Empire Lake.

Although some Washington Department of Natural Resources lands abut against Lake Roosevelt National Recreation Area, the state's Discover Pass does not cover use of NPS boat launches or tribal lands and waters.

Portions from Wikipedia - CC-BY-SA 3. Click on the photos for copyright information.